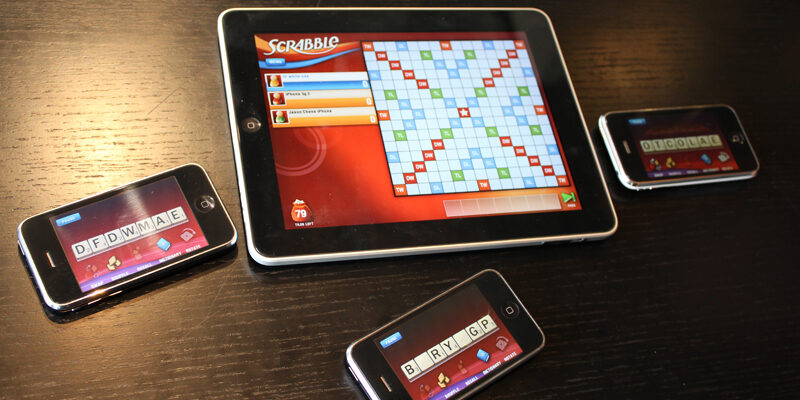 Scrabble for iPad and iOS is a must have game for long trips in the car, especially if you have children and want them to make use their minds instead of watching mindless DVD movies in back of the car. While it is not the only word game out there, as there is much competition from other board and digital word games, if you grew up with the classic board game this version for iPad will bring you hours of enjoyment. The iPad version of this classic game brings the original board game to electronic form exceedingly well. There really is no noticeable difference in the game play or strategy from the electronic version when compared to the traditional board game.
With the iOS version of Scrabble, you will be able to pick from various varieties of game play that allows you to play with people in the same room or online. A pass-and-play (“Pass’N Play”!) mode lets you hand an Apple mobile device such as your iPad, iPod Touch, or iPhone around to allow every participant play their turn while hiding their tile rack from other opponents. You can play Scrabble with all your friends on Facebook through the Facebook Connect feature. (Just remember to log into Facebook first!) You are able to also join in on, or offer public games with other Facebook users hunting for new opponents and fun games.


Another great feature about this game is that it allows you to use multiple Apple devices to create the classic Scrabble bord game feel. An entirely free and separate Tile Rack app for the iPhone or iPod touch lets you place an iPad in the middle of your group of friends as a community board. Each player then can manage their game play on their iPod Touch or iPhone. Scrabble allows as many as 25 games played at once. To add a little more difficulty and fun, Scrabble for iPad allows you to pit yourself against your Computer’s Artificial Intelligence. The Game’s Artificial Intelligence allows various levels of experience and limits the computer’s Artificial Intelligence use and size of the word bank.
One great feature that the electronic version of Scrabble has that the board does not have is a shuffle option. This option rotates your letters through random combinations which can help you think of new words. Other features include an in-game official dictionary that allows you to type in words to test if are truly legitimate. It’s up to you and your friends, but the electronic version of Scrabble also has a hint feature that will help you find the best word. The game limits you to 4 uses per game. After each and everyone’s turn on the game, the Scrabble board is updated at the top of the screen with each round’s word and score. This allows you to see real time every participants point total without having to do the math like the traditional game. In conclusion, Scrabble for iPad, iPhone, and iPod Touch is a great game to have for lover’s of the traditional board game. 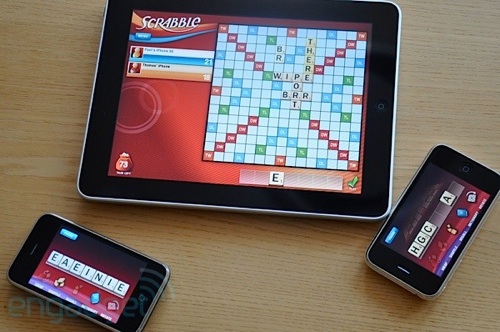 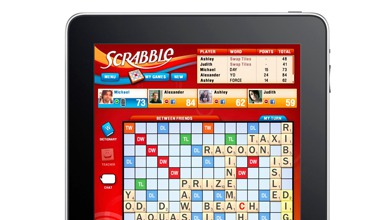